Jason Bateman Leaves a Few ‘Bad Words’ in My Mouth

There’s a lot of stuff people complain about when it comes to LA. Fake people, high rent prices, and traffic. OH, the traffic. But despite all this, living here is worth all that because there is so much to do here. Free movie screenings are one of those.

Last night, I got to go to an advance screening of Bad Words, the movie starring and directed by Jason Bateman. The screening was hosted by LA Times, so as a special treat, Jason Bateman attended the screening along with co-star Kathryn Hahn and screenwriter Andrew Dodge. Oh, and they gave us free popcorn and a drink. With all that said, how could I pass this opportunity up?

Bad Words is about Bateman’s character, Guy Trilby, an adult who finds a loophole to enter and attempt to win a children’s spelling bee. The spelling bee administrators and parents of competing children are pissed, because Guy seems like he can actually win the whole thing (let alone the fact that an adult competing in a children’s spelling bee is ridiculous), but there’s nothing that can be done because he’s technically eligible to compete. Along his journey, he’s accompanied by Jenny Widgeon (Kathryn Hahn), a reporter who is trying to create a story out of Guy’s stunt, and they have a…unique relationship, to say the least. Finally, Guy meets young Chaitainya Chopra (Rohan Chand), a fellow speller who can’t take the hint that Guy wants nothing to do with his competition. Of course, if you see the trailer, you know that Guy can’t avoid Chaitainya, and they go through quite a bit leading up to the final competition.

The movie itself was quite entertaining. I’ve mostly seen Jason Bateman in Arrested Development, so to see him in an R-rated movie where he has sex, curses, and says things that are outrageously offensive was quite refreshing. It was great to see him in this kind of role and he did extremely well playing someone evil while being hilarious at the same time. Kathryn Hahn added to the comedy as well, which was great because I had never really seen her in anything else. There’s one part where she’s having sex and she says this line that I’m sure many people will be yelling after they walk out of the theater. Finally, Rohan Chand really stood out in this film. Not only because he was a young boy in the middle of a wild movie, but because he added not only to the movie’s hilarity but its emotional depth as well (and yes, there will parts that make you go “Awww…”). This kid is young, but boy can he act. 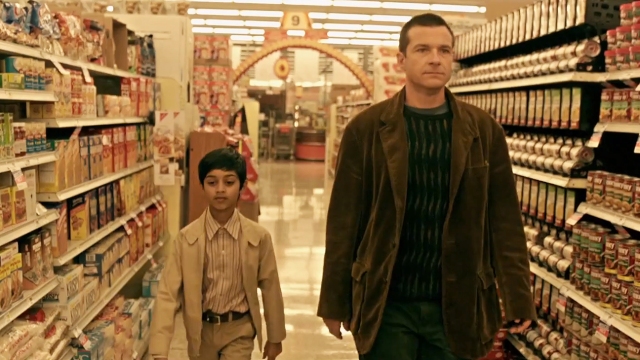 Aside from the fact that the movie was hilarious and the acting was on point, the visuals were amazing as well. Working in video production, there are a lot more details I now notice when watching movies, and one thing that stood out to me were the color palettes used in the movie. Actually, while watching, I wasn’t sure if the colors I was seeing were intentional, but Bateman confirmed after the movie that he thought carefully about the color palettes. So, I give myself a pat on the back for noticing that.

Despite everything I’ve said so far, the movie wasn’t perfect. The idea of an adult in a children’s spelling bee is already kind of out there, but there were some parts of the story that I felt weren’t all there. I’m usually the first person to have willing suspension of disbelief when it comes to crazy concepts, but there were points during the movie where I just wasn’t buying it. It wasn’t enough to ruin the movie, but it was enough to make me not walk out of the theater saying, “WOW, that was amazing!”

What WAS amazing was getting to see Jason Bateman talk about the movie afterwards. There was a lot said that I can’t remember, but hearing people get to talk about their projects is pretty cool and inspiring. It was especially cool to hear about Bateman’s experiences with the film as actor/director, since that seems like such a demanding role. Finally, the best part was when Kathryn Hahn was late to the panel, and Bateman’s excuse for her was “Sorry, she has the runs.”

Overall, I enjoyed Bad Words. I think it will keep you laughing and the story is crazy but unique enough that it will make you appreciate that it’s something original in the midst of all these overused story lines and remakes. Go check the movie out with a bunch of friends…it’ll be a hoot!