Twee-Q Will Make You Think About Guys AND Girls

There are various social media measurement tools out there that analyze different things. For example, Klout measures your social influence on certain topics. I just came across Twee-Q, which apparently measures how much you care about gender on Twitter. 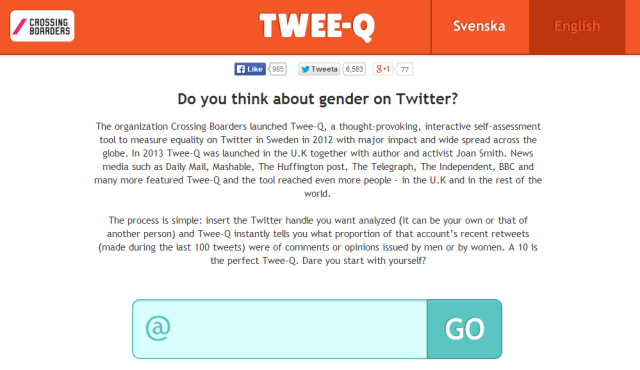 The process is simple: insert the Twitter handle you want analyzed (it can be your own or that of another person) and Twee-Q instantly tells you what proportion of that account’s recent retweets (made during the last 100 tweets) were of comments or opinions issued by men or by women.

If you know me at all, you know that I try to break gender roles as much as possible, so I decided to enter my username (@agamos…if you want to follow me) and I got a Twee-Q score of 10, the perfect score. This meant that my amount of retweets were equal among men and women. Hell yeah!

Of course, there are some limitations on this reading, such as the fact that it only looks at the last 100 tweets from the account being analyzed, and that it doesn’t necessarily show WHY you retweeted someone. For example, you can retweet a lot of women because you think that they belong in the kitchen, but Twee-Q probably won’t pick up that detail. So, it certainly isn’t perfect, but it does make you think about gender to a certain extent.

What’s your Twee-Q score? Leave it in the comments or let me know on Twitter!